During the last two years, Spain and Portugal have been some of the top performing JYSK countries. The right team, attitude and structure have been key.

Are they smiling in Spain and Portugal because of the success, or do they have success because they smile?

The last two years, Spain and Portugal have been skyrocketing their sales indexes, made fantastic improvements in turnover and earnings and been opening new stores at a pace that almost takes your breath away. GOJYSK.com visited Spain to understand the success.

“We made a fresh start 2,5 years ago, when it comes to mindset. We needed more ambition, getting a winning philosophy and needed to add some sales attitude profiles. People thought some things were impossible, but we showed that everything is possible. The big help was One JYSK and we are just great ambassadors of a great concept,” says Carlos Haba Ariza, Country Manager of JYSK Spain and Portugal. On Wednesday 10 August, all Retail Managers, District Managers and Retail Store Supporters in Spain and Portugal were together for the monthly retail meeting at the head office in Cheste. Here, KPI’s, indexes and best practice are shared and discussed enthusiastically.

A longer discussion concerns the percentage of stock adjustments. This means the percentage of products that could not be sold because they were missing or damaged for instance. The percentage last financial year was -0,92%, and this year it is -0,53%. A huge improvement and way under the goal of -0,7%. But that is not enough – just a small improvement in percentage is a lot of money and extra bonus for everyone from Retail Manager to Sales Assistant.

A great example of the attitude that is practiced in the two countries that are part of the same country organisation. It is a great start, but there is still a lot to learn and a long way to go.

“We have a positive competition between stores and districts. We want to achieve goals. You dream it, you plan it and most of the time you reach it. It is not all about my store, it is about JYSK. We want to know how, when someone is doing great and with this we are doing better and better,” says Retail Store Supporter Ana Rita Pinto Roque.

Country Manager Carlos Haba Ariza started in the job in November 2019, which is just around the time the growth of Spain and Portugal took its first steps. A coincidence? Not if you ask his colleagues.

Carlos himself is humble and gives the praise back to the team.

“I think my role has been to change the mentality and make the team think from a different perspective. Let us think what we need to reach ambitious goals. Now, we have reached these goals and almost doubled them. It is the same guys as before I started,” says Carlos. 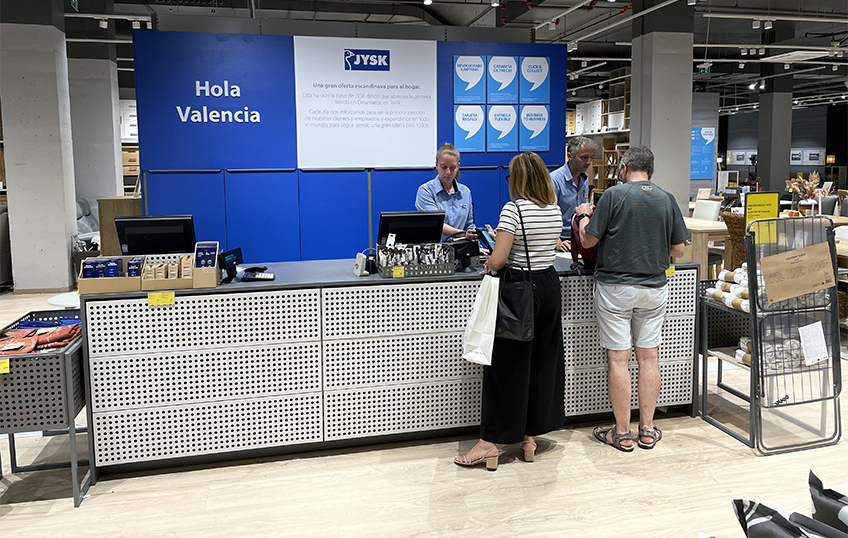 In the Valencia store a 20 minutes drive from the head office, the expansion and great development is also recognised by staff. More and more family and friends know about JYSK, and the great value for money is really appreciated by customers.

“The customers love the store. They usually come back after experiencing it one time. I think it is important that we are available to the customers, and in JYSK we have a natural attitude to approach the customers. It is a question of going a bit further and not only selling a sofa but propose a project to the customer and make them feel inspired,” says Store Manager Sandra Zomeño Olivares.

The store opened four months ago and has been one of 25 successful store openings in this financial year in Spain and Portugal.

“It is a good performance, if we compare with what we did in the past. But even if we have success, we have a long way to go. We are only starting. It is good to talk about success, and we are doing well, but I think we still have a lot to do,” says Country Manager Carlos Haba Ariza.