After six years as HR Manager for JYSK Sweden, Charlotta Lindborg has taken on a new role within JYSK as Head of HR for DÄNISCHES BETTENLAGER in Germany.

“This shows that our employee promise, ‘Bring Dedication – Meet Possibilities’ really is true. When you, like me, thrive in the company, it is a great opportunity to work in another country and continue to contribute to creating results and furthering their own personal development,” says Charlotta Lindborg. On 14 April 2020, Charlotta Lindborg ended her journey with JYSK Sweden and started a new one with DÄNISCHES BETTENLAGER in Germany. But it did not start as planned.

Because of the ongoing corona crisis, with closed borders and citizens in quarantine, Charlotta’s first meeting with her new colleagues had to be held via Skype. When she later went by car from Sweden through Denmark on her way to the office in Germany, she had to follow strict rules and pass through thorough border controls.

Gradually, however, the restrictions were eased and the more than 970 stores that were closed in Germany were gradually able to open again.

“I have met engaged, motivated and competent colleagues. I have visited 8 stores under strict restrictions. You adapt to a new situation quite fast and the employees in DÄNISCHES BETTENLAGER are doing a fantastic job in the stores. It’s really impressive under these circumstances,” says Charlotta.

Much experience within HR

There are many things to be proud of after six years with JYSK, but Charlotta particularly emphasises the structure that the team has built up over the years. Now every region has strong HR Business Partners who work near the local operations.

She also highlights the work with improving work environment in which she and the team have been involved in developing.

“Together with Management and employees within the organisation, the HR Team and other service functions, we have managed to improve the work environment at JYSK Sweden on several levels. That shows in the last two employee satisfaction surveys. For me, it is important that all employees are happy to go to work.” 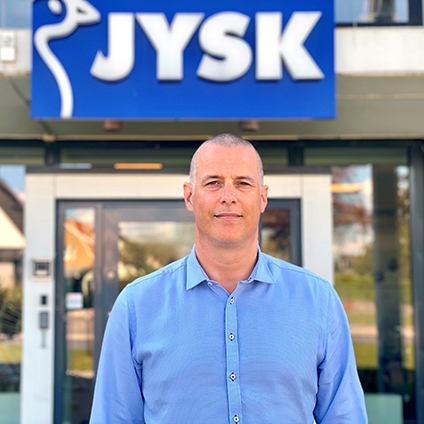 Jesper Trapp takes over in Sweden

In Sweden, Jesper Trapp is now taking over the role of HR Manager. For him, this also represents a new step within JYSK. Between 2016 and 2019, Jesper was HR Business Partner for JYSK in the Copenhagen region in Denmark.

Now he takes the trip across the Öresund Bridge, which connects Denmark to Sweden, to join the Swedish JYSK team.

“It feels really good to be back. Of course, there is a difference between Denmark and Sweden in terms of language and culture, but JYSK is the same. I had only been outside JYSK for 9 months but I quickly came to miss the culture and dynamics that are here. So when the opportunity arose it was a "no-brainer" to come back to the JYSK family,” says Jesper. From Brabrand to Canada with JYSK

Weekend trip at stake: The best Sales Attitude in JYSK will be decided

13/10/2020 - When November begins, so does the Sales Attitude Competition. The competition will run for three months and all JYSK stores over the world will compete about having the best numbers. The winner in each country will go on a weekend trip.