New person in front of logistics

Executive Vice President Logistics Ole Thomsen had his first day in JYSK on 1 June 2022. The coming months will be full of learning, introductions and visits. 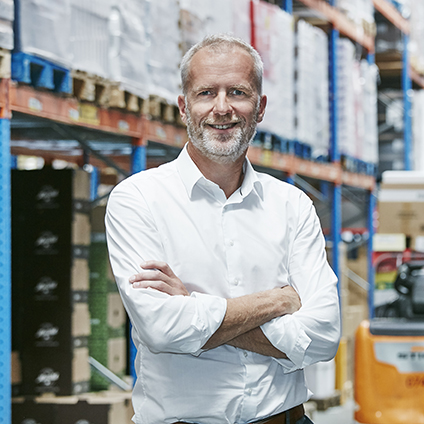 As new Executive Vice President Logistics Ole Thomsen entered his office on his first day on 1 June, the wall behind his desk already had a decoration. A team picture back from 2005, where a group of JYSK colleagues made a business trip to Würzburg, Germany, with a truck full of JYSK goods to test a new picking station at a supplier.

Ole Thomsen was on that picture along with several other JYSK colleagues that are still working in JYSK today. This also became clear when Ole on Tuesday 2 June made a tour around DC Uldum and met several familiar faces, handshakes and old jokes even though his first period in JYSK ended 15 years ago.

“I have really been looking forward to start. It is an exciting challenge on a professional level, and even though everything has become a lot bigger since 2007, it is a bit like coming home with familiar faces and the values that are still the same,” says Ole.

“Logistics is nothing without people”

From 2003 to 2007, Ole was Logistics Manager in JYSK. In 2007, DC Uldum was not yet built and JYSK had around 1,200 stores worldwide. Now he is back and will have the overall responsibility of all 10 distribution centres in JYSK.

“I have been looking forward to this new role, where I will have a more international perspective. I really like working with people, and logistics is nothing without people. We have a lot of technique and robots, but if we don’t have the right team then logistics won’t be successful,” says Ole.

“I want to understand the business fully. I know that in my position it is expected that I will quickly jump in, but no matter in which position you start, you need to get a lot of introductions and get settled, before you start bringing value. So, I will be asking a lot of questions to learn in the coming months,” says Ole.