Even though JYSK had not done any marketing, many customers stopped by, when JYSK opened the first store in Moscow on 3 June.

On Wednesday 3 June, JYSK opened the doors for the company’s first store in Russia, when customers were invited inside the new store in Trojka Moscow.

The words “Hello Moscow” greeted the customers from behind the counter, and outside the store the traditional blue and white balloons made it clear that this would be a special day.

But this could not change the fact that the opening in Russia was very different compared to other country or even store openings, as JYSK had not done any marketing prior to the opening, and as the citizens of Moscow are not allowed to go more than two kilometres away from home.

“Since we had not done any marketing, and since there are not a lot of people on the streets, the day started a bit slow. But it became better and better during the day, as the word spread that a new store has opened. Furthermore we had good online sales, so all in all I am very satisfied with the first day,” says Country Manager of JYSK in Russia, Igor Raić.

He underlines that the most important mission was to open the store and give all of the customers a good experience to ensure that they will be back again.

At the same time JYSK will gradually begin with local marketing initiatives to make people of Moscow aware that JYSK has come to town.

“We will begin digital and social media campaigns very soon, and then in a couple of weeks we will begin distributing campaign papers to boost sales,” says Igor.

He feels confident that JYSK will be a great success in Russia.

An opinion shared by the Store Manager in Trojka Moscow, Andrey Achkasov.

“Despite corona challenges, we managed to overcome all pitfalls and make our store ready for opening. It was not easy but a great team effort made it happen. The first day was very exciting and we were thrilled to open the doors to our store,” says Andrey.

He is happy that the store is now open, even though there is still a lot to learn.

“We realise that there is so much to learn in order to gain confidence and to give the best possible service to our customers, but we are ready to take on that challenge,” said Andrey after the store opening.

JYSK plans to open four stores in Moscow during the summer, and once it is allowed the opening in Russia will be celebrated in traditional JYSK style. 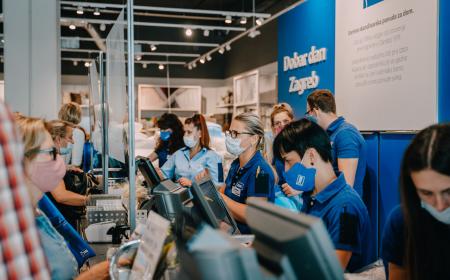