Mikael Albæk Kristensen is Expansion Director and has spent over half of his life at JYSK. He started as an apprentice in the store in Vejle, and on Thursday 5 January 2023 he celebrates his 25th anniversary in the company with 19 new country openings under his belt.

From store apprentice to director of expansion in 25 years. It may sound like a classic story about taking one step at a time up the career ladder. But for Mikael Albæk Kristensen, his working life at JYSK has been "a long education", as he puts it himself.

"It's crazy that I've been at JYSK for so many years. But I have never felt like I was done at any point. There is always something new on the way, and it is this drive in always having to move on to the next thing that has kept me in the company," he says.

Alone in Poland at 22

It all began in the JYSK store in Vejle, where Mikael Albæk Kristensen was employed as a store apprentice. The first part of the lifelong education took place in Strandby, where JYSK's apprentice education at the time took place.

"I could feel right away that I had entered a company where togetherness and community were important and were prioritised. You were also allowed to take on a lot of responsibility, even though you didn't have much experience," says Mikael Albæk Kristensen.

When he finished his apprenticeship and had been a Store Manager for a year at the JYSK store in Tønder, Denmark, Mikael Albæk Kristensen made the biggest decision of his working life: Without knowing anyone in the country, he moved to Poland to help JYSK build the first stores and win the favor of Polish customers.

"During the time I was in Poland, I really put in a lot of work, because I didn't have much else to do. I didn't know anyone and few of my Polish colleagues spoke English, so it was a big challenge in many ways. On the other hand, I had great support in the Country Manager Piotr Padalak, who speaks Danish and is still in charge of JYSK in Poland," says Mikael Albæk Kristensen.

After Poland, he returned home to Denmark, where he became a Store Manager in Horsens. Later he got a combined position at JYSK's Head Office as buyer and sales manager for Poland.

Gradually, the focus shifted to expansion, which he works on almost exclusively today. When JYSK opens its first store in Turkey in the spring of 2023, it will be the 19th country that Mikael Albæk Kristensen has helped open for JYSK. And even though Turkey hasn't even opened yet, he's busy finding the next country.

"After Turkey, we have to find another new country outside of Europe. South America, North Africa or Asia? Time will tell how it ends, but I am very much looking forward to being a part of where we are going with our great offers. Regardless, it will be something completely different from what we are used to, and it will be really exciting and challenging," says Mikael Albæk Kristensen.

With 25 years of education in JYSK behind him, he is still not finished, as long as there are new challenges ahead.

"We are never done at JYSK. The fire it lights in me is not at all extinguished yet. It may actually be burning more than ever," says Mikael Albæk Kristensen. Pascal’s long way back to life

09/02/2023 - Pascal Mustafi has proven that anything is possible. Despite a severe disability, he will soon be a full-time Sales Assistant. 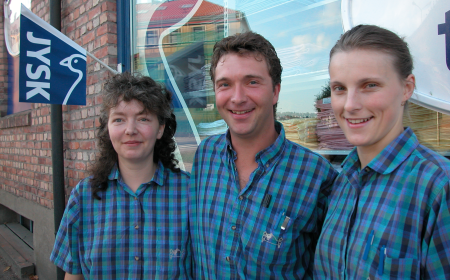 06/02/2023 - After a pause in the process due to increased prices on raw materials and services, JYSK will resume the project with the aim of opening a new, state-of-the-art distribution centre in Lelystad in the Netherlands.