Rami is the new Deputy President & CEO of JYSK

From 1 September 2022, Rami Jensen will become the new Deputy President & CEO of JYSK. In one year, he will take over the full responsibility as President & CEO.

A job in JYSK comes with a promise: If you bring dedication, you will meet possibilities.

Since entering the company as an apprentice in 1994, Rami Jensen’s strong dedication has continuously led to greater challenges and more responsibility. His career will reach a new milestone when he becomes Deputy President and CEO of JYSK as of 1 September 2022.

It was in the JYSK store in Esbjerg, Denmark, Rami started his career in retail as an apprentice. He later travelled across the country to train for the Store Manager position, which became a reality in 1996. And in 2000, just six years after setting foot in the organisation for the first time, he became Area Manager.

“Retail is often underrated as a career path, even though there are vast opportunities for taking on responsibility at a young age and shaping your job and your future,” Rami says.

In 2004, Rami became Retail Manager - a job that came with the responsibility of rolling out the JYSK concept in a new market, Hungary.

At the time, there were no Hungarian stores and no local organisation. But just one year after arrival, Rami’s area of responsibility grew again as he was appointed Country Manager in Hungary. In 2007 and 2008, the new JYSK countries Slovenia and Croatia were also added to his Country Manager responsibilities.

Retail is often underrated as a career path, even though there are vast opportunities for taking on responsibility at a young age and shaping your job and future.
- Rami Jensen, Deputy President & CEO

And while the new JYSK markets expanded, so did Rami’s family: During what came to be a five-year-long stay in Hungary, Rami and his wife welcomed their second child to the world. Their son Victor, who was only 10 months old when the family moved to Hungary, became a big brother to his new sister, Fiona.

”My family has always moved around with me. First to Copenhagen, then Budapest, and now Silkeborg, where we live today. I actually met my wife, Mija, through JYSK, when we were both working as Store Managers. And whilst living in Hungary, we were both part of the Country Management Team, meaning we were working and living together,” Rami says.

A career within JYSK

After opening 60 new JYSK stores in Hungary, Slovenia and Croatia, Rami and his family returned to Denmark where he took on a position as Retail Operational Director at the JYSK Head Office in Brabrand. His career continued to evolve as he was made Purchasing Director and later Executive Vice President of Business Development.

Aside from four months at the beginning of his career, Rami has never pursued new challenges outside of JYSK – though, naturally, the idea has crossed his mind.

“I think it would be strange, if I had never considered working elsewhere. It is only natural to evaluate your options, when you are looking for change and growth. But JYSK has continually done a fantastic job at offering me challenges that have encouraged me to develop and expand my skillset within the company,” says Rami.

In 2018, he did however leave JYSK, when he was offered to take on the role of CEO at ILVA, like JYSK a part of Lars Larsen Group. At ILVA, Rami became responsible for turning around a business that had struggled to be profitable for a number of years.

In 2021, Rami and the rest of the hardworking ILVA team were able to present the first positive result since 2009.

I think it would be strange, if I had never considered working elsewhere. It is only natural to evaluate your options, when you are looking for change and growth. But JYSK has continually done a fantastic job at offering me challenges that have encouraged me to develop and expand my skillset within the company.
- Rami Jensen, Deputy President & CEO

Most recently, he was offered to come back to JYSK and take on his perhaps biggest challenge yet: In September 2023, he will be taking over as the future President and CEO of the company. During the next year, he will work closely with current President & CEO of JYSK, Jan Bøgh, who will afterwards focus on his new role as President and CEO of Lars Larsen Group Retail.

“From an outside perspective, it can seem overwhelming. JYSK is a major corporation and there are so many people and processes involved. But the way I see it, I get to do this job as part of a huge team. It is not about ‘me’, it is about ‘us’. We are going to do this and create results together and I am very excited about that,” Rami says. 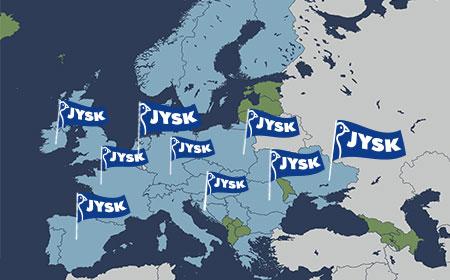