Jéan is celebrated for 40 years in JYSK

The first jubilarian to celebrate 40 years in JYSK was celebrated on 2 May in Denmark. Jéan Brøns was employed as employee number three by JYSK founder Lars Larsen in 1979. 40 years later, Jéan is still happy to be part of the JYSK journey. 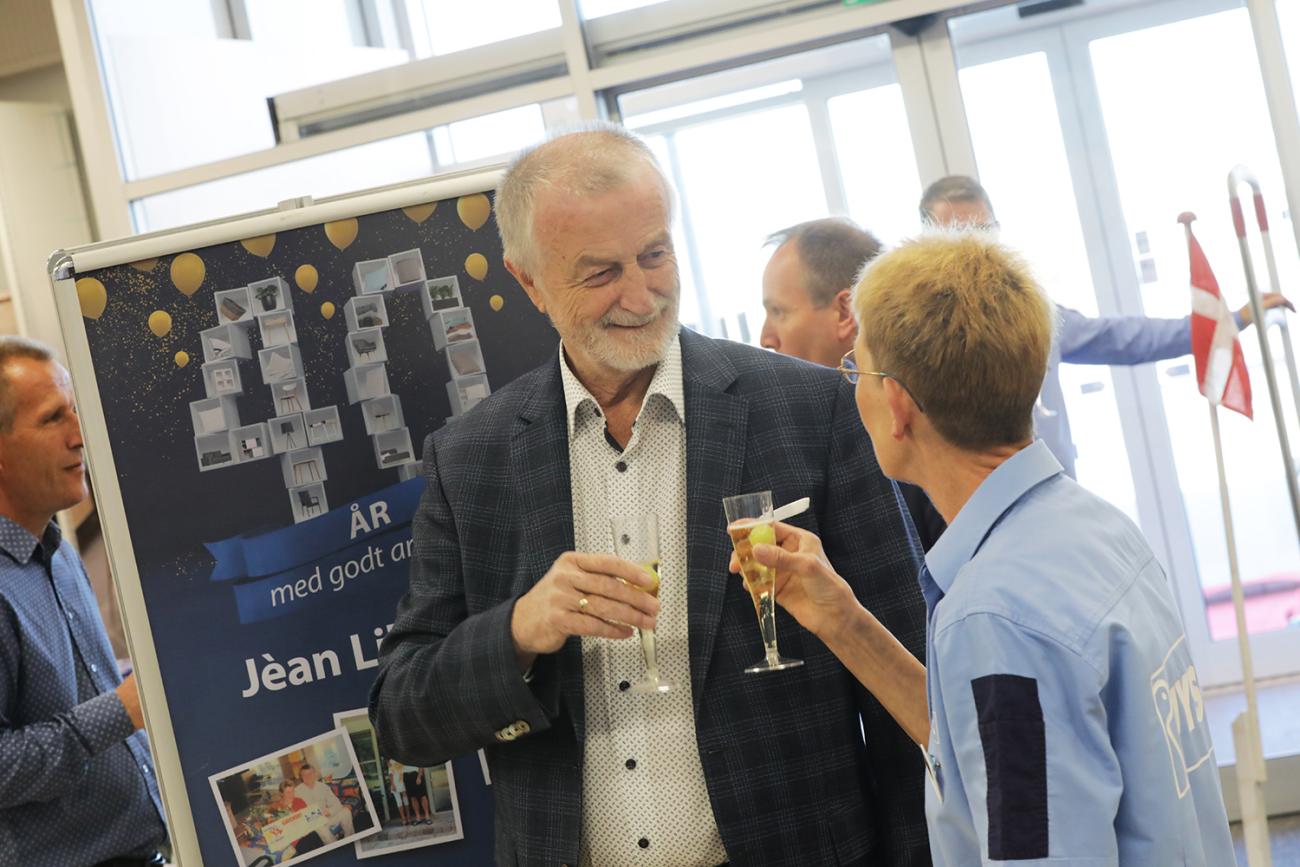 (Click on the photo to see more pictures from the celebration. Photos: Morten Holst Henriksen)

Even though the sun was shining, the wind in the Northern part of Denmark had a good hold on the more than 40 flags which flapped forcefully, as a nine meter long, silver-grey limousine arrived in front of the JYSK store in Skalborg at exactly 8 o’clock on 2 May.

This was the first reaction from the key figure of the day, after JYSK founder, Lars Larsen, had opened the door and given 60-year old Jéan Brøns a well-earned hug. Together with her husband, Allan Brøns, and her grandson, Jonas, she was picked up at home and driven to the store in the big limousine.

At the end of the red carpet, which was rolled out on the special occasion, friends, family, colleagues and former colleagues were ready to welcome and celebrate Jéan, who after 40 years in JYSK, is the first employee to reach the impressive milestone.

“I have worked together with Jéan, since we both were employeed in the company MinusService, and I am very proud to be able to celebrate her 40-year anniversary in JYSK. Jéan has always been there for me and for JYSK, and for that I am very grateful. She is a very strong ambassador for us and for all of our young people working in the stores,” said Lars Lars, who took part in the celebration together with his wife Kris, who has also known Jéan from before JYSK was founded.

Family was part of JYSK

Inside the store the counter was made into a buffet with strawberry pies and welcome drinks and in between the bed studio, shelfs with pillows and other articles for decorating the home, a long table for all guests was set with a brunch buffet.

“Jéan and I became partners when we were 14 and 16 years old, so I have been on the sideline from the beginning. It has been fun to be a part of,” said Allan Brøns, who together with their two daughters have helped in the JYSK store, where Jéan was Store Manager for 34 years.

Jéan was employed in JYSK store number three in Aalborg in Denmark, as employee number three. Only 26 days after the first JYSK store ever had opened the doors in the town of Aarhus. Shortly after she moved to another store in the Northern part of Denmark, in a town called Skalborg, where she took care of mail orders. One day Lars Larsen dropped by the store and asked to take Jéan for a drive in his car.

“We drove from Skalborg to Støvring (another town red.) and when we came to a big building in Støvring Lars Larsen said: “You are going to be Store Manager here,”” says Jéan, who initially declined the great offer from Lars Larsen.

“I have never wanted to try other things. And if you are happy with what you do, then why should you try something else?”
- Jéan Brøns | 40-years jubilarian in JYSK.

But after she had had a little time for reflection, she decided to accept the new challenge in Støvring, where she ended up staying as Store Manager for 34 years.

“It has been an exciting time, filled with challenges, but also a lot of fun. And of course it has also been hard work some times. But I am just happy to work here, and I like my job. I like the store and to provide great service to the customers,” says Jéan Brøns.

Have you never wanted to try something else than JYSK?

“I have never wanted to try other things. And if you are happy with what you do, then why should you try something else?” Jéan asks.

Had to memorise all prices

However, she does recall one time, where the thought crossed her mind, and she thought about exchanging the life in the store with soil and plants.

“When we got electronics in the store, I thought about becoming a gardener instead, because a blade of grass did not need a barcode or something like that,” Jéan laughs.

According to the jubilarian, technology is also one of the things, which has changed the most in the past 40 years in JYSK.

“When I started working in JYSK, we had to memorise the prices of all articles in the store, and when we walked up to the cashier, we had to enter the price in one of four groups of articles. That is very different today. All the concepts we have now are also completely different from before. In the old days, if we found a corner in the store we wanted to do something about, we just did it. It is much more structured today. But I think that is a good thing,” says Jéan.

In 2015, Jéan exchanged the job as Store Manager in Støvring with a job as Sales Assistant in another JYSK store in the Northern part of Denmark to get more time with her family and especially her grandchildren. But according to her manager, Store Manager Jesper Kjældgaard, you cannot tell, that Jéan has been working for 40 years, quite the contrary.

“It is amazing to experience the joy and delight you still come to work with after 40 years. I am sure that all of our colleagues here today, agree with me, that you cannot tell that you have been here for 40 years. You still solve all your tasks with the same energy and curiosity,” said Jesper among other things in his speech to the jubilarian during the celebration in Skalborg.

No plan to quit

Jéan’s many years of experience in JYSK will benefit many of her young colleagues in the store. And experience is very valuable to the founder of JYSK, Lars Larsen.

“It is a big asset, because we have a lot of young people in our stores, who Jéan can help and give guidance to. I hope that she wants to stay with us for some years to come,” says Lars Larsen.

"It has been 40 exciting years. We will see, how many more to come,”
- Jéan Brøns | Sales Assistant in JYSK, Nørresundby.

According to Jéan Brøns she will not stay another 40 year in JYSK, but for the time being she has no intention of quitting. The key figure of the day was also the last person to make a speech at the day of the celebration. Because even though the calm jubilarian normally does not like this kind of attention, it was still a good experience to be celebrated in JYSK.

“I would like to thank Lars Larsen for hiring me many years ago. I would also like to say a big thank you to all of you, who have come to celebrate me today. It is both impressing and a bit chocking to me, but most of all very, very nice. It has been 40 exciting years. We will see, how many more to come,” ended Jéan. 07/07/2020 - On 15 April 2020, the JYSK store in Ringsted, Denmark, was involved in a fire that damaged most of the store beyond restoration. Just eight days later, the store team organised a successful fire sale with the surviving products. JUK Mansfield 18/05/2019 Massive congratulations on this achievement! A real inspiration to us all!