Around the world: Sports, renovations, and support for children

On 6 May, Norwegian colleagues from all 103 JYSK stores showed up to work in football jerseys as part of the campaign #FotballTrøyeFredag. Also, the Norwegian Head Office and Customer Service Center joined, as can be seen in the photo below.

The initiative is part of the NGO Norwegian Childhood Cancer Society, where people are encouraged to donate money and create awareness by wearing the shirts. The thought behind the football theme is that every child should be given the possibility to play and have fun. For the first time, JYSK attended the National Corporate Football Championships in Romania. After almost two months and nine games, one of the two teams from JYSK won the cup of the FIFCO League. They won the final with a score of 5 to 3 after some difficult matches. JYSK in Ukraine has focused on donating locally ever since the war started. For example, the JYSK Store in Bucha donated 10% of the profit earned from the reopening week at the beginning of June to a nearby school. The store and the school had both been partially destroyed during the occupation of the city.

In the Ukrainian city, Lviv, a new JYSK store also opened on 16 June. As part of the opening JYSK decided to donate equipment to the local children’s hospital, which treats Ukrainian children with cancer.

JYSK Germany is part of a new handball parasport sponsorship

At the beginning of June JYSK in Germany announced a new sponsorship with “Glücksliga” (English: The happiness league), which is aimed at creating a fun handball community for children with disabilities. Back in March, the Distribution Center in Ecser, Hungary, could celebrate with cake when the first products were delivered to the DC.

On 7 June, the DC could once again celebrate with cake, as the first truck was loaded with JYSK’s products to a JYSK store in Budapest. 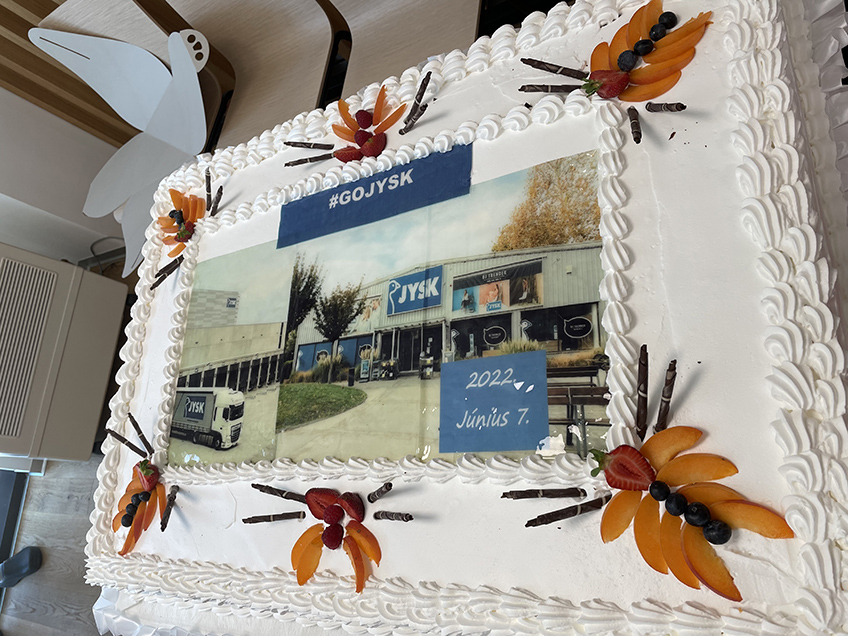 The “JYSK bedtime story” is a project in JYSK Slovenia, where JYSK plans to help furnish seven resorts for children.

As part of this plan, the second donation was recently made to the Mojca Youth Camp as JYSK donated new products within sleeping to 10 holiday houses.

The Mojca Youth Camp serves as a vacation home for children from disadvantaged families, from care institutions, or for medical vacations. Every year, around 1500 children visit the camp, who can now enjoy a good night's sleep with help from JYSK. 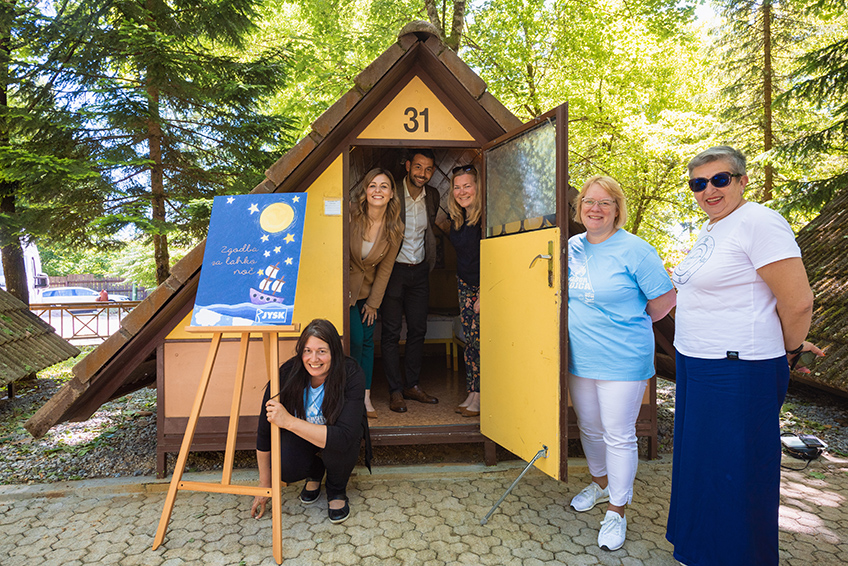 Renovation of the Head Office in Denmark is moving along

Since the summer of 2020, a large expansion has taken place at JYSK’s Head Office in Denmark. Besides expanding the office with two new buildings, a new cantina and reception are also being built. On the first week of May, the offices and meetings room in the two new buildings were ready for use, while the rest is still being renovated.

In the picture below a crane of 27 Meters lifted a new staircase for the reception, which happened at the end of June. A large lifestyle magazine in Bosnia and Herzegovina held an event where JYSK was invited to present our garden furniture. Attendants could experience JYSK’s furniture under the slogan „Experience a summer to remember..“

The event was covered by mass media as well as influencers, creating over 800 posts on social media.

JYSK once again joins the Wings for Life run

The JYSK Runner’s Club in Poland joined the Wings for Life World Run on 8 May in the city Poznań. This year, over 40 JYSK runners participated, which placed JYSK among the best represented companies in Poland and in the rest of the world. Every entry fee goes directly to finding a cure for spinal cord injury. Together the JYSK running team covered 610 kilometers.

See a video from the run below. 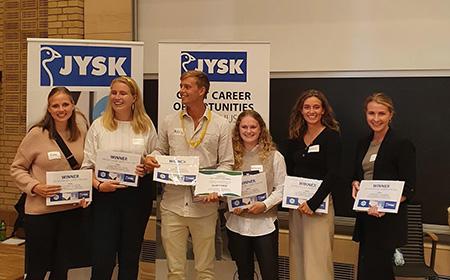