On 23 June, JYSK Greece opened store number 50 in the country.

Just two days before Dimitrios Gkoltsios and his team arrived in Ptolemaida, a city in northern Greece, they got quite an unhappy surprise.

They were there to prepare and open store number 50 in Greece, but the basement of the store was completely flooded, which meant that almost all furniture and mattresses were destroyed.

However, under great time pressure the Greek team managed to present a well-filled and pretty JYSK store with well-trained employees for the opening on 23 June. This is just one great example of how the team spirit and hard work in JYSK Greece has brought the country to 50 stores within just 7 years. All since our late founder of JYSK, Lars Larsen, participated in the opening of the first store in Athens in September 2015.

“Both me and my team feel joy and pride that we managed to open the 50th JYSK store in Greece. We did not just open a store. We opened an entrance to the customers in Ptolemaida for quality products at affordable prices,” says Dimitrios, who is Store Manager in Katerini, but took on the challenge to open the store in Ptolemaida.

75 stores as next target

In general, JYSK Greece is on a good trend with more sales and more customers. The rapid rise to 50 stores is not the end of the mission for JYSK Greece. The next target is 75 stores.

“We want to cover all main cities and create a full network in Athens. At the same time, there are some big islands and touristic areas in mainland Greece that could host a JYSK store. We will continue the great path that we are on thanks to the great work of everyone from store to office to distribution centre,” says Sandor Szimeiszter, Country Manager of JYSK Greece. 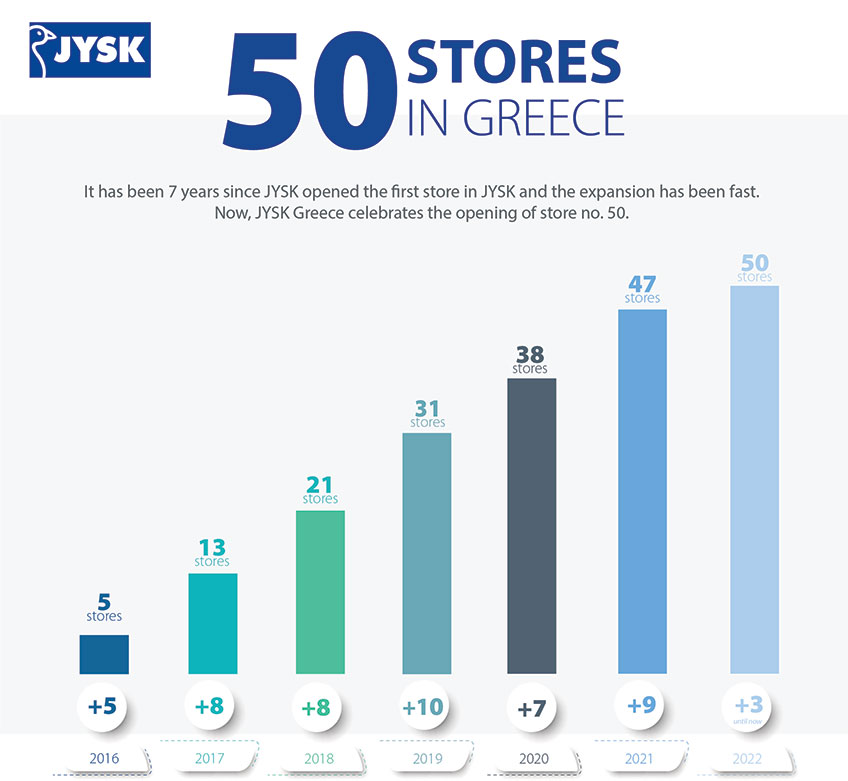