Two new records: 31 store openings in a month and 13 in a day

August 2021 offers no less than two new records regarding store openings in JYSK.

It looks more and more like a JYSK store on Salzburger Strasse in Wels, Austria. The wooden floor look and the fixtures are installed, and the last delivery of products has just arrived at the store.

The store in Wels is among the 31 new store openings in August 2021, which is a new record in JYSK.

“It is of course amazing to be part of that record. It is really great to see JYSK growing, and after we passed the 3,000 stores mark this is a great push towards the goal of 5,000 stores worldwide,” says Store Manager in Wels, Christian Trawöger.

On 26 August, another record will be set, when 13 new stores open on the same day. According to Executive Vice President Retail Mikael Nielsen the two records weren’t planned, but are a result of store openings that have been postponed for several different reasons.

“We are very proud to open so many stores in one day and in the whole month. It is only possible because all departments and our distribution centres have made a huge effort,” says Mikael.

You can see when and where JYSK opens new stores in August 2021 on this link: https://gojysk.com/en/news/new-jysk-stores-august-2021

The store openings will continue from the beginning of the new financial year in September. For next year, the goal is to open 180 new stores.

”We would like to set a high pace in opening new stores from the beginning of the financial year towards our next goal of 5,000 stores. It is getting us even closer to our customers, and it is also positive in this very special time to look forward and contribute with new jobs and opportunities in new cities and new regions,” says Mikael.

On 31 August, Store Manager Christian Trawöger and his colleagues are ready to open the doors in Wels for new Austrian customers with celebrations and a lot of great offers.

„The store looks really great with the 3.0 concept. It is really well thought out, and I look forward to the day, where all JYSK stores are updated with this concept,” says Christian. 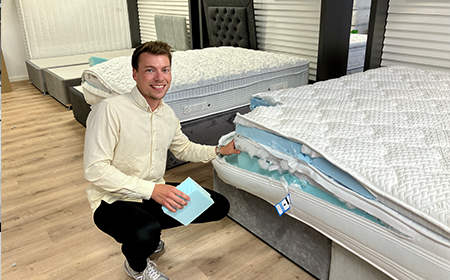