On 3 June 2021, JYSK reached an important milestone in Romania and opened store number 100 in Constanța, a port city on the Black Sea. But this was just half of the journey to reach 200 stores. The next half starts now.

14 years ago, JYSK opened the first store in Romania in Oradea, one of the biggest cities in the western part of the country. Fast forward to 2021 when, across the country and more than 800 km east, more than twenty colleagues in blue shirts are getting ready to open a new JYSK store, namely store number 100. 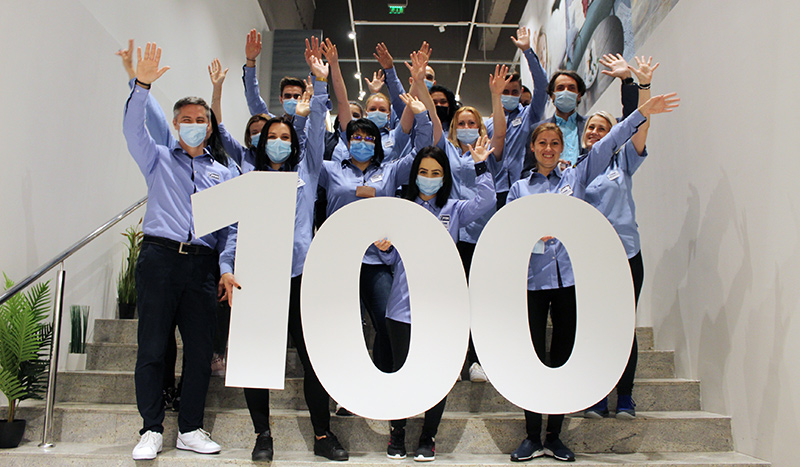 At 10 o’clock sharp, special guest H.E. Mr. Søren Jensen, Ambassador of Denmark in Romania, and Alex Bratu, Country Manager for JYSK Romania and Bulgaria, cut the ribbon to mark the official opening of the store.

“I am proud to be here today. JYSK is an example of the American dream lived out in Denmark. Or perhaps just a realisation of one of our famous fairy tales. I remember when JYSK founder Lars Larsen started his business running TV commercials offering Danes a good deal on beddings and linen. His approach was new and fresh. In the 40 years that followed, the concept was spread out over Europe and beyond. But always with the same business concept at its core: Providing affordable quality products to consumers. The fact that we celebrate the opening of store number 100 in Romania alone is testimony to the success of this endeavour. Congratulations to Alex and all of the JYSK crew on this remarkable achievement,” said Mr. Søren Jensen.

JYSK Constanța Far is the third JYSK store in the city. Getting the space ready took 55 days, and in this time both the development department and E-Team had a lot of work to do to inside.

As the company grows, so do the employees. One of them is Luminița Diciu, Store Manager of JYSK Constanța Far. She was hired as a Sales Assistant nine years ago, after she graduated from university. It was her first job. After a few years she got promoted to Sales Leader, then to Deputy Store Manager and, as of now, Store Manager.

“I am so happy. This has been a wonderful day! We had a lot of work during the past weeks, but we also had challenges and satisfactions. The team is really pleased with what we have done. Half of the team comes from other stores and got promoted here, while the other half is new. The new colleagues are also enthusiastic, they post about the opening and they have a very nice vibe,” said Luminița.

She mentions that the best-selling products during the first day were pillows, mattresses and duvets - products for which JYSK is well known.

Romania has one of the fastest expansions in JYSK, with approximately 15 new stores added each year. And reaching 100 stores is just the first half of the road.

“It has been an incredible journey! Seven years ago we were thinking about the future and decided that 100 stores in Romania would be enough. But things changed, we started to be more courageous, and we opened stores in smaller towns, with 7,000-8,000 inhabitants. Now we think that a more realistic number would be 200 stores in Romania,” said Alex Bratu, Country Manager for JYSK Romania and Bulgaria.

He also points out that the physical stores are and will continue to be an important part of the business. Being close to customers also means that every person should have a JYSK store close to where they live.

Watch a video from the opening: 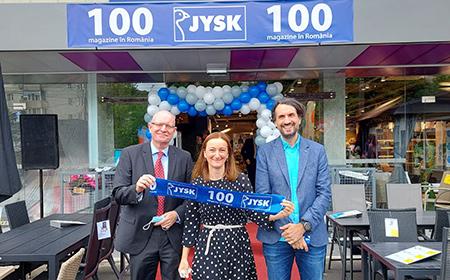 11/06/2021 - JYSK reached an important milestone in Romania and opened store number 100 in Constanța, a port city on the Black Sea. But this was just half of the journey to reach 200 stores. The next half starts now.

03/06/2021 - More than 2,000 store activities are planned in the coming years, and the E-Team is involved in every activity. Therefore, the E-Teams are growing in several countries.