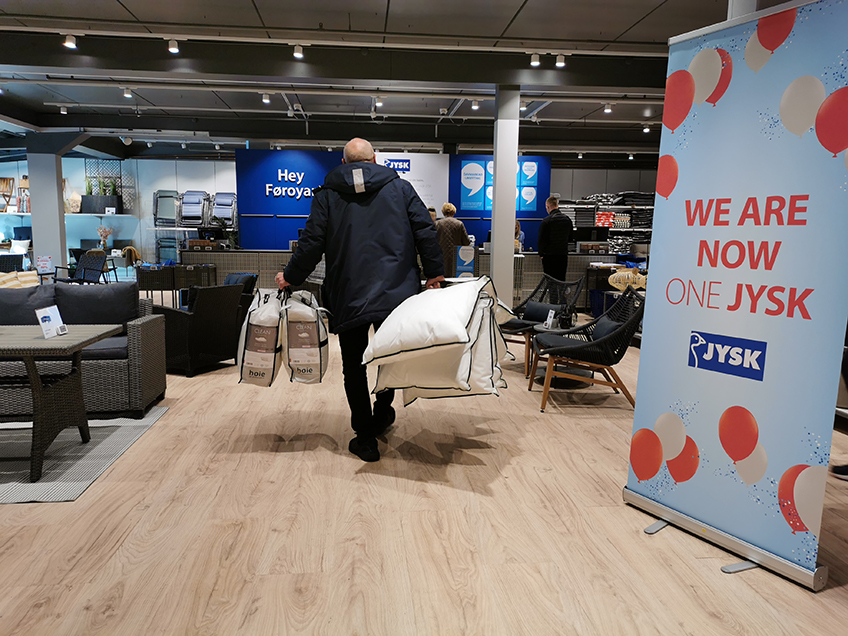 One of the most isolated JYSK stores in the world in Faroe Islands now also has Store Concept 3.0. At the same time, the name was changed from SKEMMAN to JYSK.

Somewhere in the northern Atlantic Ocean between Iceland, Norway and Great Britain, 18 small islands form the country of Faroe Islands.

Here, the second oldest Franchise market of JYSK has been operating a store since October 1986 under the name of SKEMMAN (“Sengetøjslager” (bed storage) on local language).

31 March 2022 was - as well as the opening day in October 1986 - a historic day for the Franchisee in Faroe Islands. This was the day when the store reopened after three closed weeks, as the store went through a major update to Store Concept 3.0. Now, 2,455 square metres of sales area on two floors are welcoming Faroese customers.

Help from Denmark and Iceland

Due to the importance of the store, both colleagues from Iceland and Franchise Field Manager Line Mortensen participated in the update of the store.

“The final result of the new 3.0 store was very satisfying. During the transformation of the store, we had many challenges for all to learn about the new concept, but we had a great team that worked hard to get a fantastic result,” says Line and continues “when we opened many customers expressed ’wow’, when they entered the store.” The reopening day was also historic, as the old name SKEMMAN was changed to JYSK. A name that has meant a lot to the local colleagues and customers just like DÄNISCHES BETTENLAGER did in Austria and Germany. Therefore, the experience from rebranding in Austria and Germany was also used in cooperation with Marketing and Business Development.

“They helped us creating a project plan as a foundation for the rebranding. This just shows how much we are ONE JYSK when we all work together,” says Franchise Manager Magnus Thorn Andersen.

Faroe Islands and Iceland is operated by the same Franchisee and the Faroese update should serve as inspiration and best practice on how to also rebrand the seven stores in Iceland from the name RÚMFATALAGERINN to JYSK in the autumn of 2022.