On 9 December 2021, Oleg Berezyuk, JYSK Ukraine Store Activity Coordinator, opened his 100th JYSK store during his 16 years in the company.

When Oleg Berezyuk stepped through the door as a Store Manager in Kyiv in 2005, he had no idea what he had started.

Since then, he has learned JYSK by heart. Knowledge he now utilises every time he opens up a new store. In his current role, he has helped to open stores not only in his native country Ukraine, but also in Poland, Greece, Norway, Georgia, Tajikistan and Kuwait.

“It is especially interesting to work abroad. You work in a team consisting of people with different mentalities, expand your horizon and develop as a person. After all, work in the store is a mechanism, and it must be well-established and cohesive,” says Oleg and continues:

“At one time, I dreamed of a job that would require active business trips. We can assume that my dream has come true, which has given me a lot of experiences, but which can also create some challenges. For example, once while traveling on business in Ukraine I took a bus and for a while I couldn’t remember exactly where I was going.”

100 steps on the way to implement new JYSK strategy

In JYSK, we want to be closer to the customer, and an important part of that is opening new stores, which means that Oleg’s job is a central part of succeeding with the strategy.

“I have known Oleg for more than 15 years as an open person, always smiling, but at the same time a very determined colleague. Oleg is a great organiser and motivator, a true leader who charges his colleagues with his energy, is always on top of things, takes lead on the most difficult tasks and achieves the goals despite any obstacles,” says Ievgenii Ivanytsia, Country Manager of JYSK Ukraine.

Oleg admits that JYSK for him is, above all, about people and common stories.

For example, he recalls when his colleague made a marriage proposal to his soulmate. Oleg helped him in the preparations for the surprise, and the married couple, Vadym and Marina, still work in JYSK.

Oleg remembers many such stories.

“During my 16 years at JYSK, I have had the opportunity to talk to a lot of interesting, inspiring people whom I will never forget. Many of them still work with me today. So, I want to thank everyone very much, for this very pleasant chapter of my life at JYSK. I look forward to further collaboration and opening another 100 stores,” says Oleg. 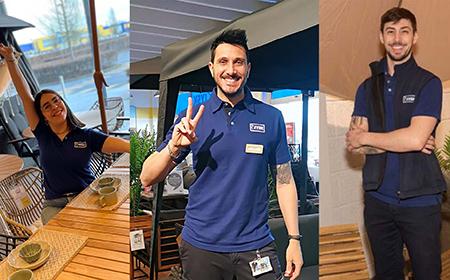